As I’ve previously mentioned, I was able to play in the Jambalaya Flute Orchestra that opened the New Orleans NFA convention this summer.  There were 150 flutists in the ensemble, from all over the world (the women sitting next to me were from Atlanta and Canada!) and we played every member of the flute family: piccolo, flute, alto, bass, contra bass, and contra contra bass! 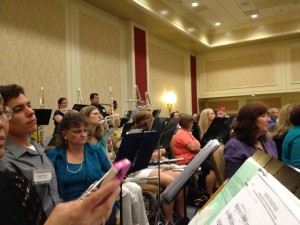 Big, big kudos to Kathy Farmer for organizing everything in advance.  We arrived in New Orleans a day early, and had two rehearsals in order to prepare our concert. 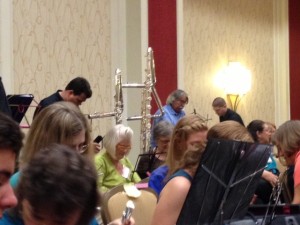 Close up of the contras 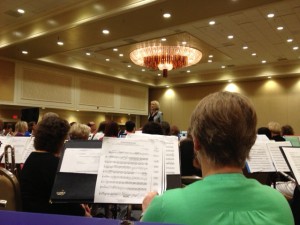 Achievement Award Winner, was our guest conductor.  I appreciated how no-nonsense she was, and how she was able to quickly assess our rehearsals and address areas that needed attention with just the right amount of sass.  My favorite line: “The D.S.  is B.S.”!

We opened with Ponchartrain for Flute Choir (2011) by Imani Winds‘ Valerie Coleman, which was an incredibly cool piece.  It opens with waves of flutes imitating the destructive waves of Katrina, and ends with the march of a krewe through the streets of the French Quarter.  Sarah Jackson and Christine Erlander Beard were the piccolo soloists for Narcisse Bousquet’s Les Fauvettes “Polka”, they played effortlessly and sounded fantastic.   I still can’t believe that piece was written around 1864!  And I also really enjoyed the playing of Antonio “Toto” Carrasqueira 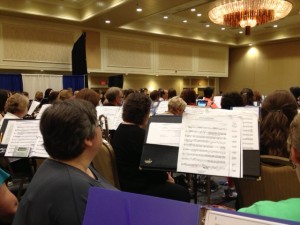 on Carinhoso by Pixinguinha.  It turned out he was staying on the same floor of the hotel as I was, I shared some nice elevator rides with him.  This is one aspect of the convention that I love – everyone drawn together by the shared experiences of our concerts!   Two other arrangements I really liked were In a Persian Market by Albert Ketelbey, arranged by Shaul Ben-Meir, and Marche des Gibaros (pronounced hee-bar-os), by Louis Moreau Gottschalk, arranged by Trevor Wye.  I can’t believe how many times I’ve heard the Ketelbey and just never knew what the piece was called!  And Trevor Wye’s new arrangement of the Gottschalk is really fresh and exciting – the piece was originally written in 1857.

I celebrated our performance with beignet time afterwards! 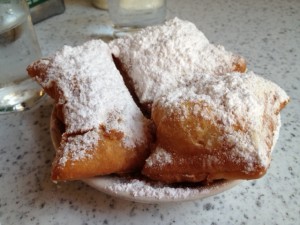 This entry was posted in Flutists and Recordings, Inspiration. Bookmark the permalink.