Northern Westchester Flutes, an ensemble of seven professional flutists from the area just north of New York City, was founded in 2001. Using four members of the flute family (piccolo, C flute, alto flute, and bass flute), they perform an exciting repertoire spanning the centuries from the Renaissance to the present, including transcriptions and original compositions. Unique to this ensemble, Northern Westchester Flutes performs without a conductor and one-on-a-part. The musical selections are from an extensive repertoire that includes ensembles from trios to septets. The group enthusiastically contributes community service with a myriad of concerts at retirement centers, churches, and public libraries. Northern Westchester Flutes was honored to be chosen to perform at the National Flute Association’s Annual Convention in New York City in 2009, where they performed the New York debut of Suite for Nine Flutes by Arcady Dubensky, and had two composer/arrangers in the audience, Shaul Ben Meir (arrangement of Mussorgsky’s Night on Bald Mountain) and Kelly Via (Appalachian Suite), hear their works. 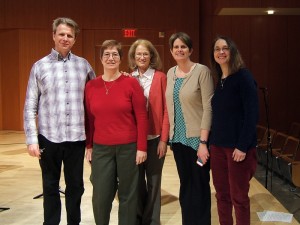 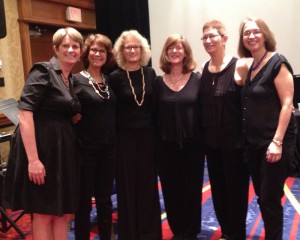 NWF after performing with Robert Dick at the NFA Convention in Washington, DC, August 2015 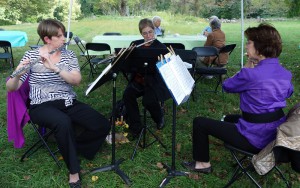 Alice Avouris studied flute with Paige Brook and Alex Murray. She received her Bachelor and Master degrees in music from Michigan State University. For the past ten years she has been organist and choir director at the Reformed Church of Cortlandtown. She teaches flute at her home in Yorktown and performs with the Taconic Opera.

Sandra Chan graduated with a Bachelor in French from the University of Michigan and a Master in Teaching from Pace University. Sandra studied flute with Shaul Ben Meir, and was introduced to flute choir under his guidance. She currently teaches French at Scarsdale High School School, and performs with Tapestry Chamber Music Ensemble.

Elyse Knobloch has extensive chamber music experience with the Boston Woodwind Trio, Storm King Woodwind Quintet, and Hudson Chamber Music Society. An avid supporter of new music, she has performed premières of composers John Bavicchi, Joel Kabakov, John Leslie Adams, and Peter Frost. Elyse holds degrees from Boston Conservatory and Lehman College and studied with Paige Brook, Paul Fried and Thomas Nyfenger. She is a member of the Bas Duo, a guitar and flute collaboration, and Aves Musicum. She resides in Mount Kisco and teaches in her home studio.

Rebecca Quigley teaches privately at her home in Cortlandt Manor, is Webmaster for the New York Flute Club, and serves on the editorial advisory board for Flutist Quarterly magazine, the publication of the National Flute Association. She performs with The Chappaqua Orchestra, Collegium Westchester, Senasqua Winds and Tapestry Chamber Music Ensemble. She received her Bachelor of Music from Skidmore College and her Master of Music from the University of Illinois at Urbana-Champaign. Visit her website at www.rebeccaquigleyflute.com.

Cecilia Sparacio’s musical background stems from her experience in opera, orchestral and chamber music performance. She regularly plays with the Amato Opera, Taconic Opera, and the L’Amore della Musica Woodwind Quintet. She is the organist and choir director at Good Shepherd Episcopal Church in Granite Springs. She holds a Bachelor of Music degree from Mannes College of Music, and Master of Science in Special Education from Manhattanville College. Currently, she is the Assistant to the Director of Titles at the Metropolitan Opera.

Dianne Spitalny is the principal flutist of The Chappaqua Orchestra and a founding member of the Spianato Winds. She has performed with the Norwalk and Stamford Symphony Orchestras, the Metropolitan Wind Symphony of Boston, and the Sherwood Woodwind Quintet. She received her Bachelor of Music from Ithaca College and a Master of Music from the New England Conservatory of Music. She has studied with Paula Robison, Murray Panitz, Samuel Baron, John Heiss, David Berman and James Pappoutsakis. She taught instrumental music in the Chappaqua Central School District until her recent retirement, and continues to teach students privately.