The concert is over, what a day!

Had a great morning at the convention, skipped lunch and met everyone in Maryland B&C at 1pm, the location of the Alexander Murray Lifetime Achievement Award Tribute Concert at 1:30pm.  Every person and group performing on the program had the same idea, we all arrived at the same time!

NWF checked to make sure there were enough stands in the room (there were), and asked Robert if he wanted to run anything before hand (he didn’t).  So we found some seats and visited with the other performers.

I have to say that all through the convention I’ve seen Program Chair Joanna Bassett floating around from event to event making sure everything is running smoothly.  Unless you are looking for her you almost don’t see her!  I don’t know how she is able to maintain such a cool and composed demeanor, but I was able to introduce myself and thank her for everything she did to make this convention possible.

I had a few minutes to chat with Nicole Riner, and it turns out that we were at the University of Illinois at Urbana-Champaign at the same time.  Her performance of Debussy’s “Prelude a l’apres midi d’un faune” was spectacular on the program.  I also spoke with Pat Zuber and Leslie Timmons, who had organized this whole tribute to Alex.

Alex arrived early and immediately got mobbed.  I was grateful for a few moments to speak with him, to reintroduce myself since I left UIUC 18 years ago.   We had a good laugh about the way we used to do lessons, and then he got very serious and wanted to know if I was still pursuing my musicology.  When I said not really, he got even more serious and said I should reconsider – that the musicology field could really use musicians of the caliber who perform at flute conventions.  I was very flattered. 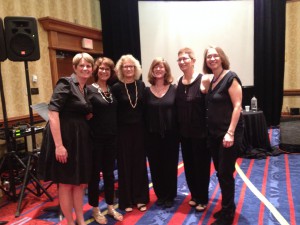 But I digress!  There was a great crowd at the concert.  We were the fourth group on the program.  And eight short minutes later, it was completely over.  “Air Alight” went really well, and we all commented that we’d like to play it again.  Robert had another event to go to and didn’t stay afterwards for all the pictures.  We got great feedback from the audience, the effects that Robert wanted were really well received.  With his permission we took a video of the piece and I need to figure out how to create a still from it. 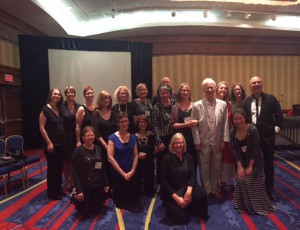 All the performers. Alexander Murray is in the tan suit.

The concert went way long, and all the tributes from Alex’s students were beautiful.  Alice and I chose not to speak, or recognize the typos from the stage.  Before we played, Robert spoke about his work with Alex, and that was where the focus should be.  Alex also got up to speak towards the end, and read a gorgeous poem about blackbirds that had everyone in tears.  Truly a memorable afternoon.

Dear readers, thank you for following me on this journey this summer.  I hope my students have learned a couple of things about working with composers and what it is like to play at the convention.  I hope I have accurately conveyed Alex’s and Robert’s places in history; the flute world is forever grateful for their visions and for their guidance as they coax us along with them. 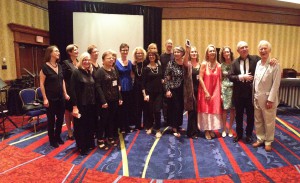 I love Alex’s laughter in this shot! 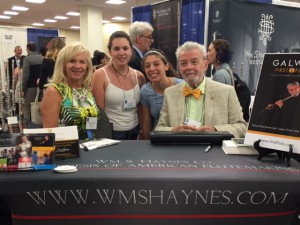 Oh, and this happened!  Beyond happy to have shared this day with my students Katie and Abby.

This entry was posted in NFA. Bookmark the permalink.